The festival remembers the legend of Prahlad and the demon, Holika. During the festival people cover each other in bright coloured powder, called gulal and abir, which recalls the story of Krishna and his love for Radha. The story of Holika and Prahlad symbolises good overcoming evil. To celebrate the story, large bonfires and burned during Holi. In many parts of India, a dummy of Holika is burned on the fire, during the evening of the full moon, which purify the air of evil spirits. Foods such as puranpoli, dahi-bada and gujia are also served.

Not only India, but countries like Nepal, Jamaica, South Africa and the UK celebrate Holi. The festival welcomes the Spring and represents new life and the energy of the season. Despite the religious roots, there is little religious activity involved during the festival. Holi is a time when traditional roles and levels of status in Indian society are turned upside down. Yet, in one part of India there is a tradition of men and women taking part in a mock battle, however one of the rules is that the men are not allowed to fight back. Once everyone is dripping in paint and coloured water, the normal clues to decipher who is in what caste or class are disguised so Holi is a great leveller. Everyone in India takes part in Holi; newspapers are likely to show pictures of ministers, even prime ministers, splashed with colour.

Groups carry drums and other musical instruments, go from place to place, sing, and dance. People visit family, friends and foes come together to throw coloured powders on each other, laugh and gossip, then share Holi delicacies, food, and drinks. In the evening, people dress up and visit friends and family.

In the Brai region around Mathura, in north India, the festivities may last more than a week. The rituals go beyond playing with colours, and include a day where men go around with shields and women have the right to playfully beat them on their shields with sticks. It is known as Latthmaar Holi, traditionally celebrated in the Barsana village. Barsana is the village of Radha and women assume the role of gopikas (Radha’s friends) and men as gopas (Krishna’s friends). 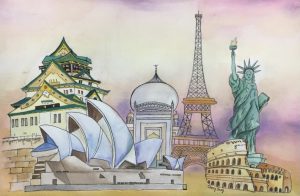